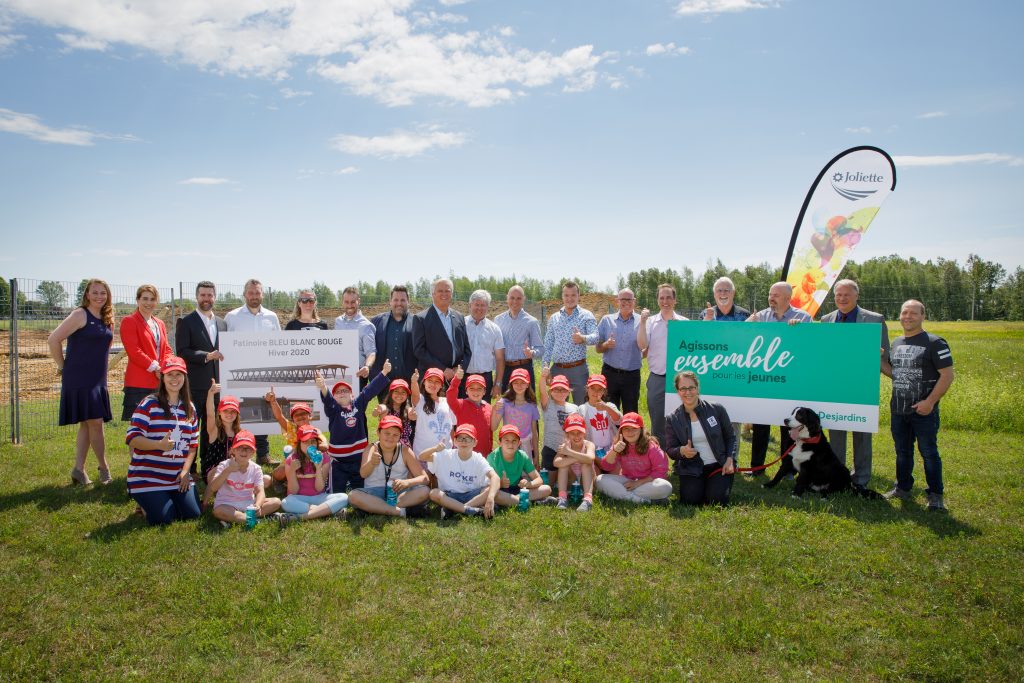 As most community stakeholders had gathered in Joliette for the groundbreaking ceremony of the next BLUE BLANC BOUGE rink, the Montreal Canadiens Children’s Foundation announced a new partnership with Harnois Énergies, a local business.

The City of Joliette held an official groundbreaking ceremony on Tuesday, June 18, to kick off the construction of the Montreal Canadiens Children’s Foundation’s 11th BLEU BLANC BOUGE rink. At a cost estimated to 4.4 million dollars – including a 1.6-million-dollar donation from the Foundation to the city and its residents – the project marks a new milestone in the history of the BLEU BLANC BOUGE Rink Program, which celebrated its 10th anniversary earlier this year. Indeed, the skating rink in Joliette will be the first outdoor rink bearing the Canadiens’ logo to have a permanent roof that will maximize throughout the seasons the use of this infrastructure built in accordance with NHL standards. In winter, the roof will allow to extend the skating season by improving the quality of the ice as the temperatures rise with the arrival of spring. In summer, when the rink changes into a multi-sport facility, the roof will create a huge playground sheltered from bad weather on which children and adults can practice a variety of sports, rain or shine.

Students from Marie-Charlotte Elementary School, who attended the event along with several partners, local media representatives, city councilors and employees, were all smiles when the mayor unveiled the design sketches for the service chalet and covered rink, which will both be erected in the large green space on Lépine Street, between Saint-Pierre South and Frenette Streets, facing Barthélemy-Joliette High School.

Geneviève Paquette, Executive Director of the Montreal Canadiens Children’s Foundation, was delighted by the enthusiasm shown by community stakeholders following the selection last December of Joliette as the next recipient of a BLEU BLANC BOUGE rink, making it the fifth community rink outside the greater Montreal area.

“We are happy to team up with the City of Joliette to provide high quality infrastructure to the neighborhood’s youth. We are already witnessing the strength of a committed community such as yours and would like to acknowledge the generosity of local businesses who have volunteered to contribute to this promising project and help us make it a success,” said Geneviève Paquette, Executive Director of the Montreal Canadiens Children’s Foundation.

As a matter of fact, Mrs. Paquette took the opportunity to announce a new partnership with Harnois Énergies, who has recently pledged to donate $100,000 to the Foundation to support the expansion of its BLEU BLANC BOUGE program across Quebec. Half of the donation will be dedicated to the construction of the Joliette rink, on which the population of Lanaudière will be able to skate as soon as January 2020, while the other half will go towards building the Val-d’Or rink, which will welcome its first skaters the following winter. For Harnois Énergies, whose head office is located only a few kilometers away in Saint-Thomas and who also has a regional office in Val-d’Or, this partnership was in part motivated by the company’s desire to invest in communities where the organization is already well established, notably by supporting sports projects that will help those living in poverty and encourage youth to develop to their full potential.

“Harnois Énergies is very happy to be associated with the Montreal Canadiens Children’s Foundation in this project of a BLEU BLANC BOUGE rink in Joliette. We believe that it is a structuring project for our community and that it provides permanent facilities that will encourage our youth to move,” added Serge Harnois, President and CEO of Harnois Énergies.

Thank you to our dedicated volunteers

Staying active all year long with the Foundation!