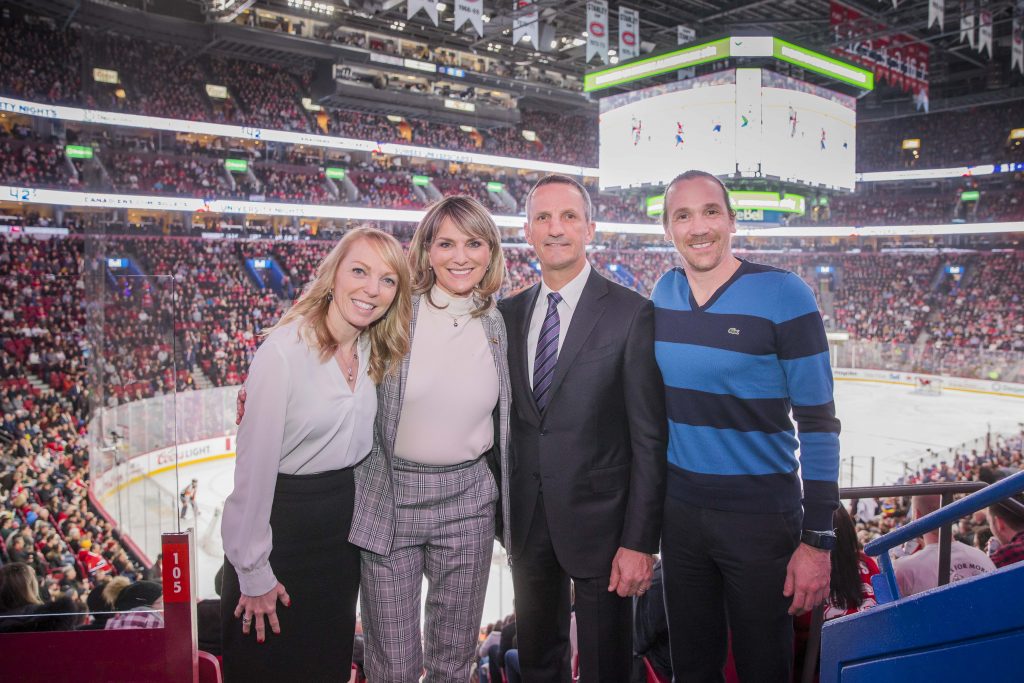 As part of its BLEU BLANC BOUGE program launched back in September of 2008, the Montreal Canadiens Children’s Foundation is proud to announce that its 13th community rink will be built in the Jonquière borough of the city of Saguenay. Construction will get underway in the fall of 2021, for an opening scheduled in time for winter 2022. The BLEU BLANC BOUGE program consists of building outdoor multipurpose and refrigerated community rinks to provide kids from underprivileged areas with infrastructure aimed at giving them a reason to discover the benefits of a healthy and physically active lifestyle.

“The Foundation carries on with the promise to expand its flagship program across the province of Quebec, with this rink being the seventh BLEU BLANC BOUGE rink to be built outside the greater Montreal area. This type of high-quality multisport infrastructure will provide the citizens of Saguenay and surrounding areas with a modern playground on which kids and their families will be able to experience firsthand the pleasures and benefits of living a healthy life by finding new ways of getting more active throughout the year,” stated Canadiens owner, president and CEO, Mr. Geoff Molson.

The Foundation relies on precise indicators to evaluate the potential sites for the construction of a BLEU BLANC BOUGE rink. Areas considered must show a significant number of underprivileged schools and children, have a dire need for outdoor sports facilities accessible to all, and local stakeholders must demonstrate a strong commitment to issues related to the development of healthy lifestyles among young people. In light of those criteria, the lot neighboring the Patro de Jonquière, located in the Rivière-aux-Sables sector, was selected in conjunction with the elected officials of the City of Saguenay as an environment where the BLEU BLANC BOUGE program would be most likely to have the strongest impact on the targeted clientele.

“The adoption of healthy lifestyle habits at an early age usually leads to a healthier and more active community in all material respects. I am therefore especially proud to play a part in the announcement of this BLEU BLANC BOUGE rink in Saguenay. Thanks to this quality equipment offered by the Montreal Canadiens Children’s Foundation, many children will be able to get more active and contribute to the effervescence of a new living environment animated by our partner, the Patro de Jonquière. On behalf of the youth from the Jonquière borough and the entire City of Saguenay, we thank you for this investment that will undoubtedly contribute to the future of our community,” says Josée Néron, Mayor of the City of Saguenay.

Since the BLEU BLANC BOUGE program is part of a concerted strategy to help children in need, its success depends on teamwork with existing municipal, school and community stakeholders, as well as with private companies who wish to get involved in a unifying and promising project. As a matter of fact, Rio Tinto announced today a $450,000 contribution over the next three years to support the implementation of the BLEU BLANC BOUGE program in Saguenay. This amount will be donated to the Foundation through the Rio Tinto Aluminium Canada Fund, which aims to generate value in their host communities.

“Since its creation in 2008, the Rio Tinto Aluminium Canada Fund has invested more than $10 million per year in major initiatives to improve quality of life in the regions where we operate,” said Mr. Samir Cairae, Rio Tinto Aluminium’s Managing Director, Atlantic Operations. “We are very pleased to partner with the BLEU BLANC BOUGE program to provide families in Jonquière and surrounding areas with better access to sports activities, helping to promote healthy lifestyles.”

To ensure the success of this program in terms of both activation and adoption, the Foundation formed a dynamic partnership with M361 (formally known as Québec en Forme), sharing the ultimate goal of improving the health of children living in underprivileged areas. It works closely with the Foundation in selecting community partners and districts to efficiently implement the program and assess the impact of this initiative.

About the BLEU BLANC BOUGE program

The BLEU BLANC BOUGE rinks are built in accordance with NHL regulations and dimensions (200 by 85 feet) and feature ice quality that meets the highest professional rink standards, while offering the versatility to enjoy other sports over the course of the year. The skating season takes place from the end of November until mid-March, while various types of ball games like basketball, soccer, ball hockey and other sporting activities can be played on the concrete base slab in the spring, summer and fall months. Since 2009, ten (10) of these community outdoor rinks have been built on the island of Montreal, in the boroughs of Villeray–Saint-Michel–Parc-Extension, Montreal North, Verdun, LaSalle, Côte-des-Neiges–Notre-Dame-de-Grâce and Ahuntsic-Cartierville, as well as in the cities of Longueuil, Laval, Sherbrooke and Trois-Rivières. Two (2) other rinks are currently under construction: the first one, located opposite Barthélemy-Joliette High School on Lépine Street in Joliette, is expected to welcome its first skaters just in time for the upcoming holiday season, while teams mandated by the city are working on preparing the site for the second one, in Val-d’Or, so that the Foundation can take over construction in the spring of 2020, with an opening scheduled for the following winter. Once completed, these new infrastructures, combined with the one in Saguenay, will bring the number of BLEU BLANC BOUGE rinks built by the Foundation since the creation of its flagship project to a total of 13.

About the Montreal Canadiens Children’s Foundation
The Montreal Canadiens Children’s Foundation provides assistance and support to children in need. Since its creation in August 2000, the Foundation has donated close to $30 million to over 800 charitable endeavours from across the province of Quebec working towards the well-being of underprivileged children. The Foundation fulfills its mandate in two ways: firstly, through a unique flagship project – the BLEU BLANC BOUGE program – which consists of building community refrigerated and multisport rinks; and secondly, by providing financial support to organizations whose projects and programs allow children to adopt healthy lifestyles by being more active.

About Rio Tinto
With around 15,000 people working across 35 plus locations, we’re the biggest mining and metals company operating in Canada, and we’re committed that the work we do creates value and opportunity that reaches far beyond our operations. We hire local people. We partner with leading Canadian business and community organizations. We work hard to be good neighbours and to take good care of our people, our natural surroundings, and Canada’s rich cultural heritage.

Putting our rinks to good use, even in the summer!

Unveiling of our 11th BLEU BLANC BOUGE rink in Joliette